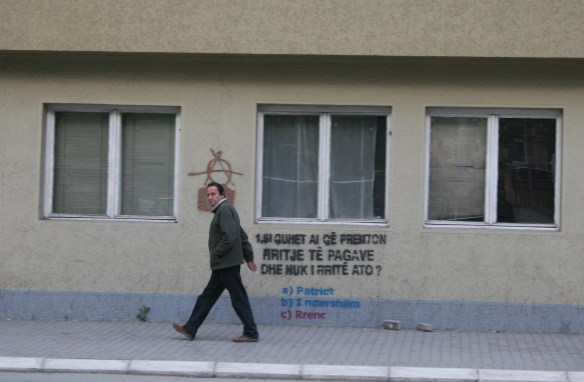 From the very first moment I was wondering how I will get there. It was a last minute call and one week I applied and second week I went. I got the info, that we will stay in the hostel Velania. I was pretty surprised, when there was no address information, only the quarter of Pristina, that´s it. The other challenging fact was, that I landed to this small Pristina airport during the night. Few taxi drivers tried to scam me from the very first moment –  the first price was 30 EUR (which is another surprising fact that in Kosovo you pay with Euros) even though I knew it should be around 15EUR. But I used this old technique and started walking into the dark (yeah, it was 2AM), and of course on of these guys came to me and started negotiating – after 15 minutes I got to my price.

Next day I was walking in the streets of Pristina, following this creepy map in Lonely Planet. I have noticed that there were almost no street signs and I got totally lost. I asked some girls sitting on the street pointing in the map where is the center – they told me the way but were not able to answer my question where were we, I mean in which street we were located. They said that the streets are being renamed all the time and that they do not follow the newest names. Few days after I understand why, when we watched this documentary film:  Blue Wall Red Door. It explains the constant changes of the street names in Pristina – before there used to be Serbian names and sometimes even the street names were missing completely, but after the independence they implemented new Albanian names and again changed them several times. So the postmen have hard times in Pristina, because the senders usually only describe the color of the door and that the house is close to that restaurant which has been abandoned like 15 years ago. Poor postmen in Pristina!