Time is flying – two last weeks in Guatemala had passed as fast as the water flowing down the hills during the rainy season, I just can not believe that our volunteering period is over.

I continued working in Centro de Salud. The workers had their monthly evaluation of malnutrition programme deadline, so there was a lot of paper work. Because of lack of the computers in the centre, I had to rewrite some files in hand and then eventually in the computer too. One day, I went to work to Cerro de Oro which is a little village about 10 km far from Santiago. There is a little clinic with two doctors. We were weighing small children that were accompanied by their mothers. They were standing in the line and I realized how huge difference is in their age. There were some 15 years old mothers standing along with 40 years old!!! First I thought that these young moms were older sisters of those babies and on the other hand some older women looked like grandmothers because they already had grey hair. But they were all mothers of those babies!!! They seriously should learn more about birth control because this is just insane.

The very last week I was also intensively working on the film about EVS and I also started making the other film about ADISA school and their programmes for disabled children and adults which was really interesting. I visited a couple of schools were the disabled children are placed along with normal students. I heard that disabled people are usually perceived very badly in Guatemala so it is good that children in normal schools are learning how to get along with disabled classmates. Actually, some of them have only problems with concentration or with writing skills but normally you would not even noticed that there is something wrong with them. Juanito was an exception he is 10 years old boy, he lost his arms and legs when he was a little boy and ever since he is dependent on the wheel chair. He is a very nice guy and when I was filming him in the class, he was smiling and he seemed happy. He was shy though so even when I tried, he did not want to speak in front of camera.

We were collaborating to produce the movie with Argentina, the director of ADISA school and it was really a great team work. We went to the local radio Voz de Atitlán to ask for a help a broadcaster to record the voice for the movie. So we were in the professional recording studio and it was interesting to see how it works. I was also introduced to Argentina´s son Ricardo, really nice guy, who can speak perfect English (probably the best English I have heard in Santiago) and he helped me with editing the movie because you can imagine that it is pretty hard to produce a movie in Spanish when you actually don´t speak much Spanish. After a work we went to have a worthful glass in a local bar. I actually did not know about existence of bars in Santiago because you just dont see any on the streets and this bar was kinda hidden too. You also never see the locals smoking on the streets and you hardly can find cigarettes in the shops. The beer in the shops is also quite expensive so people just seem to live a very exemplary life, going to churches instead of pubs.

TRAVEL TO THE PACIFIC COAST 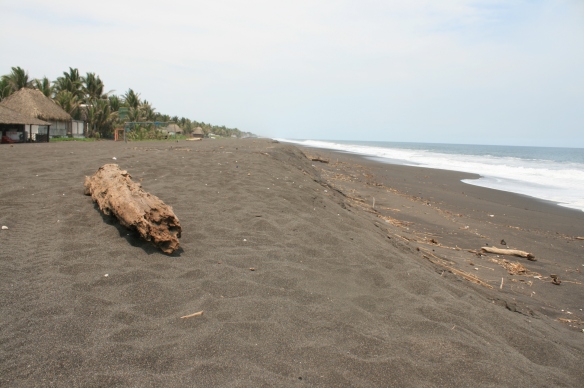 Finally we also went to a trip to the ocean. Guatemalan PACIFIC COAST is pretty rough and forlorn. First, we visited PORT SAN JOSE where we spent a day by the ocean. Me and the Estonians girls went to MONTERRICO which is supposed to be the most beautiful part of the coast. The waves were enormous and it was impossible to swim because the undercurrent was very strong. It was an off-season so there were almost no people in the town, just few American tourists. We spent a night in cabaňas on the coast, it was great to fall asleep with the sound of the ocean. The bus ride back the next day was pretty tough- we had to first take a boat a cross the river that divides the coast with the inland and then change the bus three times. So we took those funky chicken buses (how they are called) and I was really surprised when we ended up paying 100Q in total and spent half a day traveling back to Santiaguito.

I also had another interesting experience in the hospital. I got something in my eye end it was pain like a hell so I went to the emergency room. Well, I was waiting for the emergency for two hours o it was not really emergency. In the meantime I went through the medical check- because of course when your eye is hurt the most important thing to check is patient´s weight, body temperature and pressure. Anyway, the doctor saved my life, I already saw my self as a blind person until the end of my life so I was so happy that after couple of hours he helped me to get rid of the pain and he made me to see again! All this fun costed 200Q! Who was saying that Guatemala is a cheap country? How can poor Guatemalans afford to pay this incredible amount of money for a medical care? And this price was not set up because I was foreigner, everybody is paying the same!

To make some sort of conclusion to those almost two months I have spent in Guatemala:

I have to admit that I have learned a lot of patience here since the mentality of local people is so different. I also learned that we should appreciate the things that we have in our life and in confrontation with those disabled children I also realized how lucky I am that I was born healthy. I am also thankful that I did not have to struggle with a severe poverty when I was a small child and did not have to work hard like many Guatemalan children do. It was another unforgettable experience in my life that I have done and if someone was wondering what to do with their free time or how to be beneficial in the life and do not just go after the money and fame which is volatile anyway (as my mum usually say: The money will be always there, but we will not), I would just recommend everybody to go to some developing country and do something meaningful and help people who actually need it. You will see how great feeling it is after all. The only bad thing is that the fun and experiencing someday finishes and finally you have to come back home to the everyday reality, back among the ordinary people, back to take a metro, back to the life where internet runs fast, where you can find anything you want to in the supermarkets, where people do not care about the others, where money means more than anything else. I am not looking forward to come back home to be honest.