I am sitting on the terrace of Santiaguito school, enjoying the beautiful view on San Pedro volcano, palm trees and green garden and listening to the birds- it is cloudy Saturday morning, a bit chilly because there was a big storm yesterday night, so we did not have electricity for a while which was quite romantic. We sat around the table with the candle light and were drinking couple of cervesaz with the other volunteers- quite chilly evening. I usually feel very tired by the end of the work week, so there are no big parties on Friday night and we go to bed as early as usually.

While sitting on the terrace and writing these lines and editing some videos, I can also hear the chants from the Miel church which is close to the port, about 1 kilometer from the school. In Santiago Atitlan, there is a big meeting in the church these days that lasts for three days and we can hear constant singing and celebration from there because it is very loud and the songs are wafting in the air. The day before we had a lecture with Diego who explained to us what this church is all about – it seems to be an Evangelic sect that was founded by Gaspar Sapalu, Santiago Atitlan-born priest who is calling himself the Apostol! I went to the church yesterday to witness the ceremony and I sneaked in – the non-believers were not allowed to come in. I was totally shocked when I first entered the church. There was a couple of thousand people there- mostly women because this event was dedicated to them. I really could not believe my eyes. They were all singing and dancing and waving with shawls or some big leaves and they seemed to be in a trance. I would compare it to the live show of Madonna when people go crazy while seeing her! There was some priest on the stage (it was not prater Gaspar himself) and orchestra and couple of dancing women waving flags and everybody was devotedly singing the songs that were very melodic and rhythmic – not like slow chorals in the catholic churches in Europe. I would call it a Christian discotheque.
In the evening we got a chance to go to the church again with some Guatemalan women who are staying with us in the extra room in the school. So we were allowed to enter the church legally with them but I was told that I can not take any pictures or videos- they obviously remembered me from the afternoon when I was shooting there. I tried to take one picture and I was caught straight away! Ha, if they knew how much material I had shot there before, they would have sent me to the hell immediately, I guess. The atmosphere was the same – all the women were crazy. There was just one difference- the pater Gaspar was there too! So we saw him on our own eyes. He is 60 years old and got his PhD. degree in California. The sect was founded in Michigan in the US and has many followers all over Central America and United States. After this incredible experience me and Jan decided that we will make a film about religious fervor in Santiago and about all the sects that are here. It is really very interesting. I plan to make an interview with one of the ladies that have attended the sectarian disco session. – Update: The women refused to talk in front of the camera.

WORK 10-14 May
I continued working in INED (Institut nacional de education diversificad) which is a high school that our coordinator Diego is attending. The school schedule is in the afternoon only – from 1PM to 6:30PM. The students are 13-30 years old, some of them are older because they did not have a chance to attend high school earlier (because they did not have money and were working in order to make money to be able to pay the high school or their parents did not let them study etc.). The level of English of the students is really basic – some of them can not speak at all, so I would say that there is no difference between students in the primary school and high school. They also have no textbooks and their English teacher Salvador can not speak English- so I have to communicate with him in Spanish! He is basically only writing some words on the board and students are copying it. The students have no clue to what a grammar is, and can not make phrases in English. The fifth grade (which is going to graduate this year) ,where Diego is studying, is majoring in tourist guiding classes, so these guys should speak some English if they become tourist guides. The idea was to teach them some more specific words related to tourist industry but I am afraid they have to start from the very beginning. 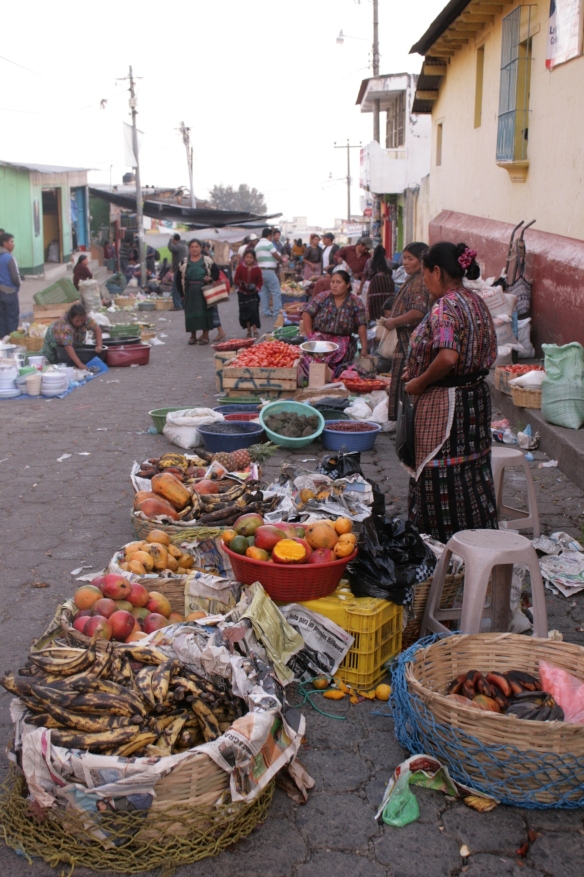 TRIP AROUND THE LAKE ATITLAN

On Tuesday and Wednesday the fourth and the fifth grade plus the director Phelippe and a few teachers went to a trip around the lake Atitlan. I was asked to come with them and film the whole trip. It was really great because like that I could see the lake from all sides. We went to SANTA CATARINA, which is a small village on the west side of the lake. We went swimming there in the lake and I found out that the students can not swim – only few guys could – which really does not make any sense to me when these kids were grown by the lake! Well, I understand that the women only go to the lake to wash the clothes or to get the water so they never need to learn how to swim.
We continued by the van to SOLOLÁ which is the capital of the whole province. We went to the local market which is colorful as other markets around. We spent a night in PANAJACHEL, the biggest city which is on the north side of the lake. It is quite touristy and many Americans are buying piece of land and build houses over there. No wonder why – the beauty of the lake attracts many people and the lake is number one tourist attraction in the country. In the 60´s and 70´s it used to be a hippie hangout place in the Central American region. It is inhabited by Kaqchikel Maya people who are wearing different kind of colorful clothes. We visited the Butterfly Park (Mariposario) close to Panajachel in jungle with many kinds of plants and there were three monkeys in the trees too.

The next day we continued to SANTA CLARA and SAN JUAN on the western shore of the lake. In the mountains above the lake close to Santa Clara we witnessed the real Mayan ceremony. A Mayan medicine-woman was praying to the Gods and smoking big cigars in the holy place in the mountains in front of the fire. There are just few shamans like her remaining around the lake. In San Juan we visited a waving place called the Asociación de mujeres de Color where they produce different types of textiles with natural colors made of some special plants (www.asociacionlema.es.tl).

I also started shooting the documentary about the volunteers and about the places where we are working. On Thursday I went with Jan to Chuk Muk which is an area couple of kilometres far from Santiago Atitlan. There is a clinic for the people who are living there. It is all together some 5 thousands people. The area with new houses was built after 2005 when the hurricane Stan hit the region and destroyed many houses. The clinic has one doctor and a nurse. Doctor Miguel is super nice young guy who studied medicine in Cuba and now got a job here in Chuk Muk. I made an interview with him and was shooting him while he was working so I saw the families that are coming there. Usually only Mayan women with children come there because men are working during the day or they are never sick, who knows. The second part of doctor´s job is visiting patients at their homes. I went with him, too and saw the whole Chuk Muk area. It looks somehow weird. The houses are not very nice, they all look the same and there is nothing but the houses. It is like living in some remote place in the middle of nowhere with no facilities. We visited some pregnant woman in her home who had two other kids, they were sitting there, all dirty. They probably do not go to school.
On Friday morning I went to Centre de Salud, clinic in the centre of Santiago Atitlan that is right on the main square. I was interviewing the director of the clinic and the stuff- Graciela (Diego´s wife) and Miguel Angel. The function of the clinic is to make enlightenment in hygiene, pregnancy prevention and checking malnourished children, among others. The health service is for free in Guatemala because there is no social or health insurance system at all. So it is good that even poor people can get a medical treatment and medicine.
I took an initiative and I visited one human rights organization by myself. I wanted to invite the stuff to the screening of human rights documentary films that is being planned on every Wednesday in Santiaguito lecture hall starting next week. I wanted to ask them if they could hold the discussion about the documentaries but since my Spanish is still very limited I could not explain it. Hopefully I will succeed next time. My idea is to show the documentaries to the high school students, teachers and some educated people from Santiago. I think they don´t know much about human rights. The capacity of the space is small, though so it will not be as big an event as I had planned before. There is no cinema in Santiago, so we can only show the movies to a couple of people. I have few DVD´s that I got from People in Need NGO in Prague that I want to show here – some from Cuba and some from Mexico.

OK, that´s all for this week, hasta luego, amigos!